Vancouver, BC –  October 28, 2020 — Ares Strategic Mining Inc. (OTCQB: ARSMF) (TSX-V: ARS) (FRA: N8I1) (“Ares” or the “Company”), is pleased to announce the completion of its delineation drilling at the Lost Sheep Mine, successfully locating a large discovery of additional fluorspar within its permitted mining area, and expanding its primary mining operation for 2021.

James Walker, President and CEO stated: “Finding such large fluorspar mineralization zones just next to the area we had planned for our initial mining operation has completely changed and expanded our mining plans. Our engineers have decided to increase the capacity of the plant from 250 tons/day to 500 tons/day, and mine more through open pit mining than underground, significantly lowering the mining cost for each ton of excavated fluorspar. This second drill program has located fluorspar mineralization larger than the initial target, and which connects the initial target to another known mine, creating a far larger initial target the Company can begin exploiting next year. The discovery translates to an accelerated ramp-up in production plans that were planned to begin towards the end of 2021, but which can be moved forward by 6 months. This is a tremendous development for Ares, and massively improves the Company’s prospects and potential for next year when production begins.” 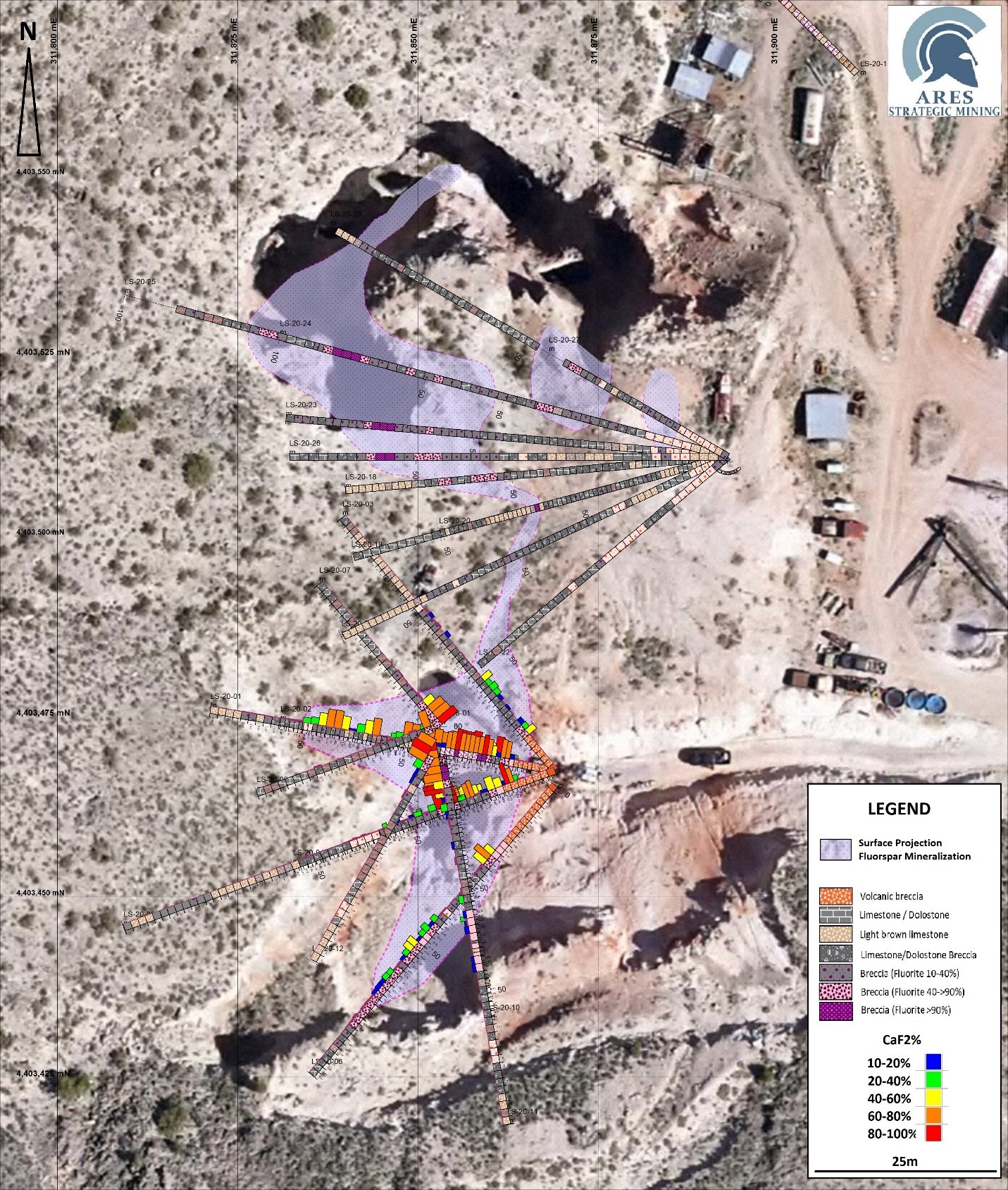 Fig. 1 Plan view of 2020 drillholes and delineation of fluorspar mineralization. 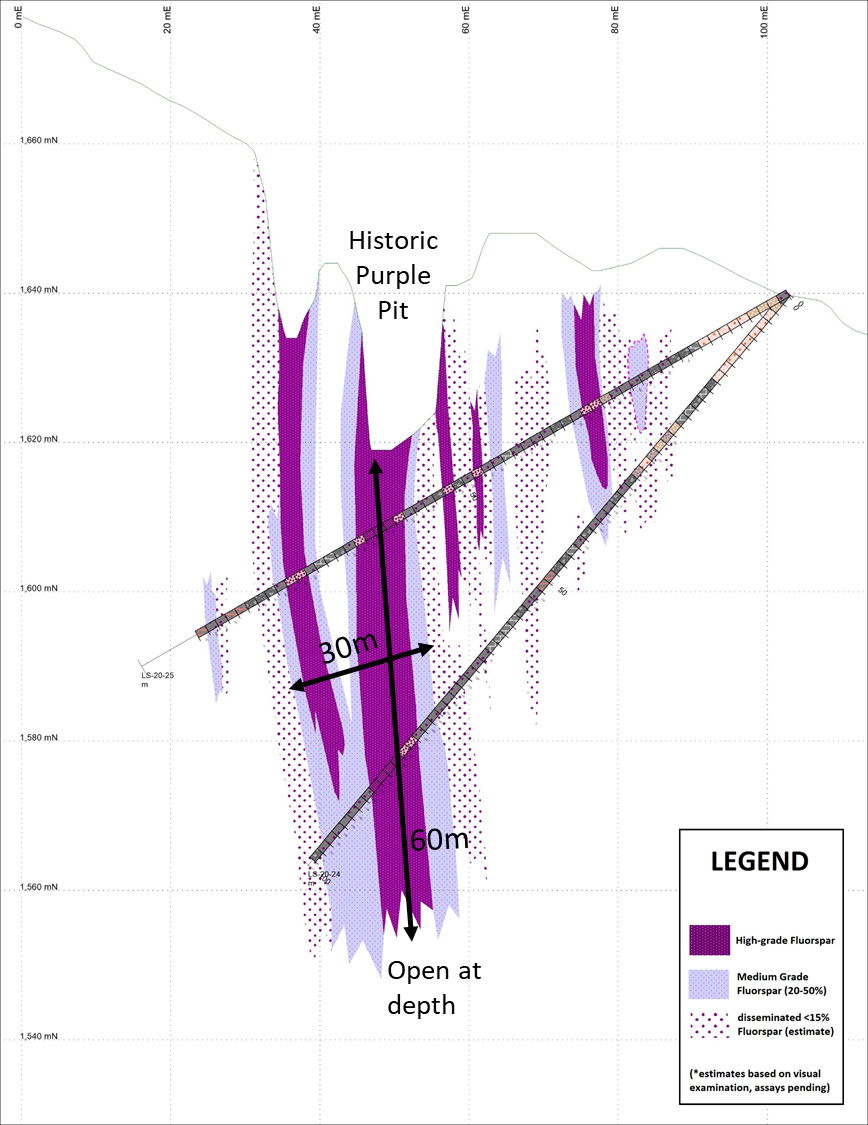 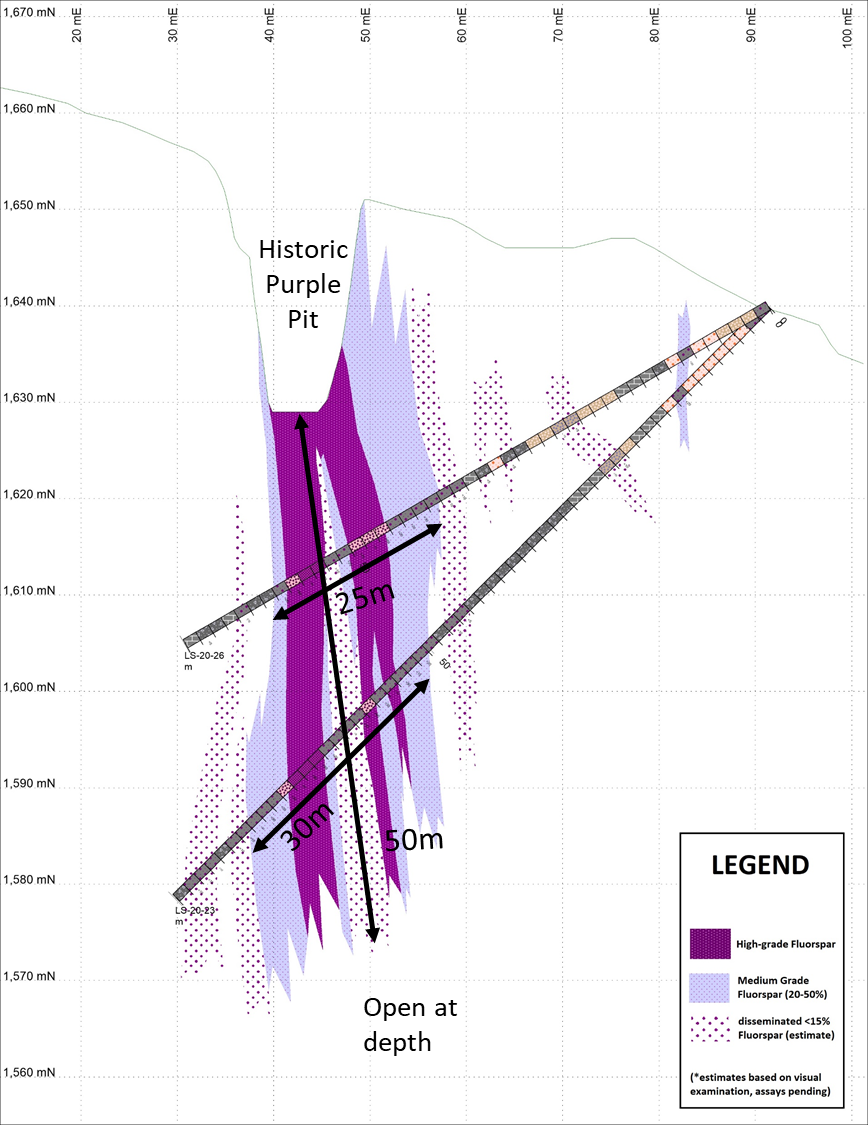 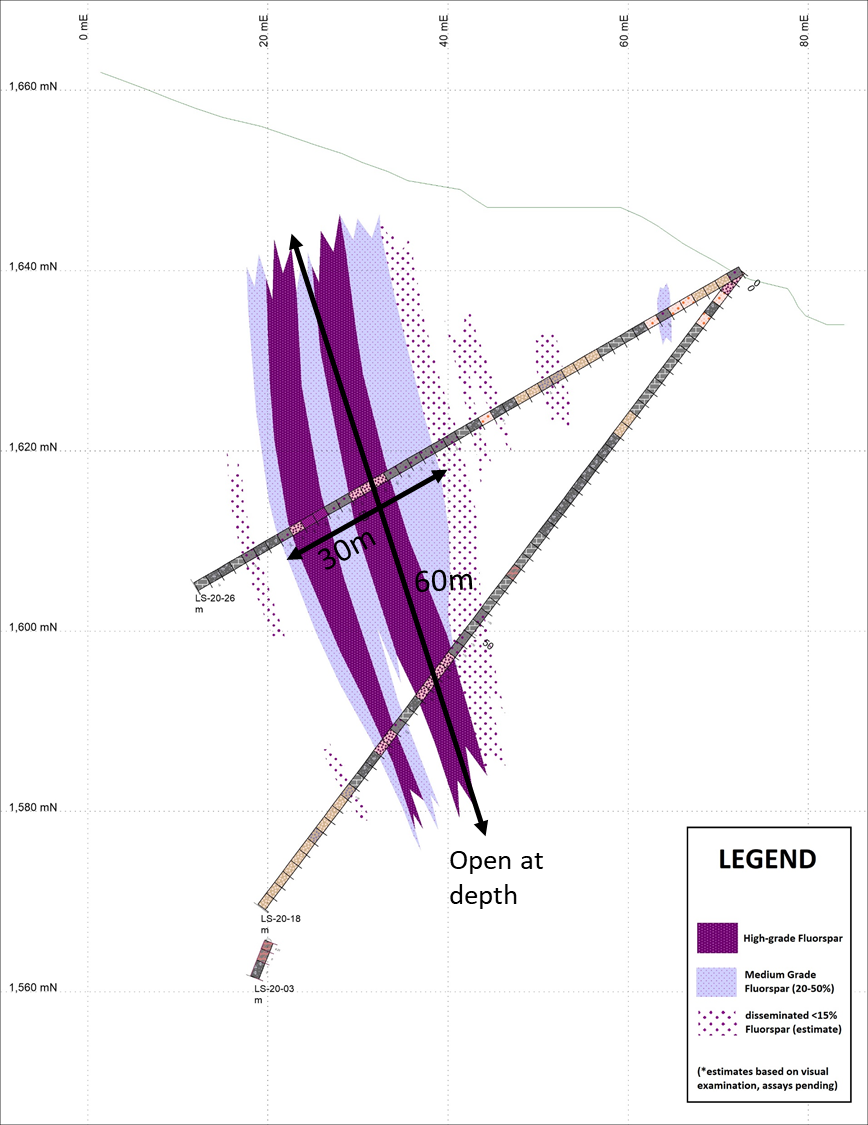 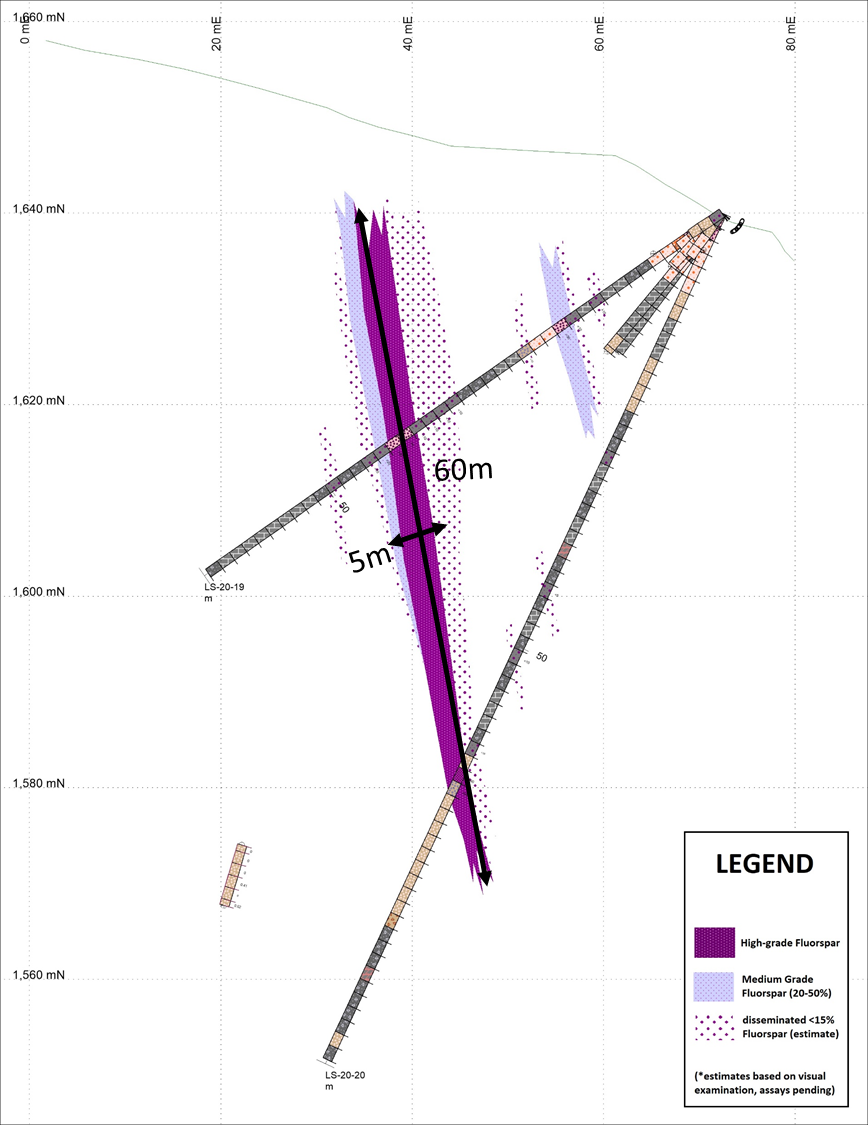 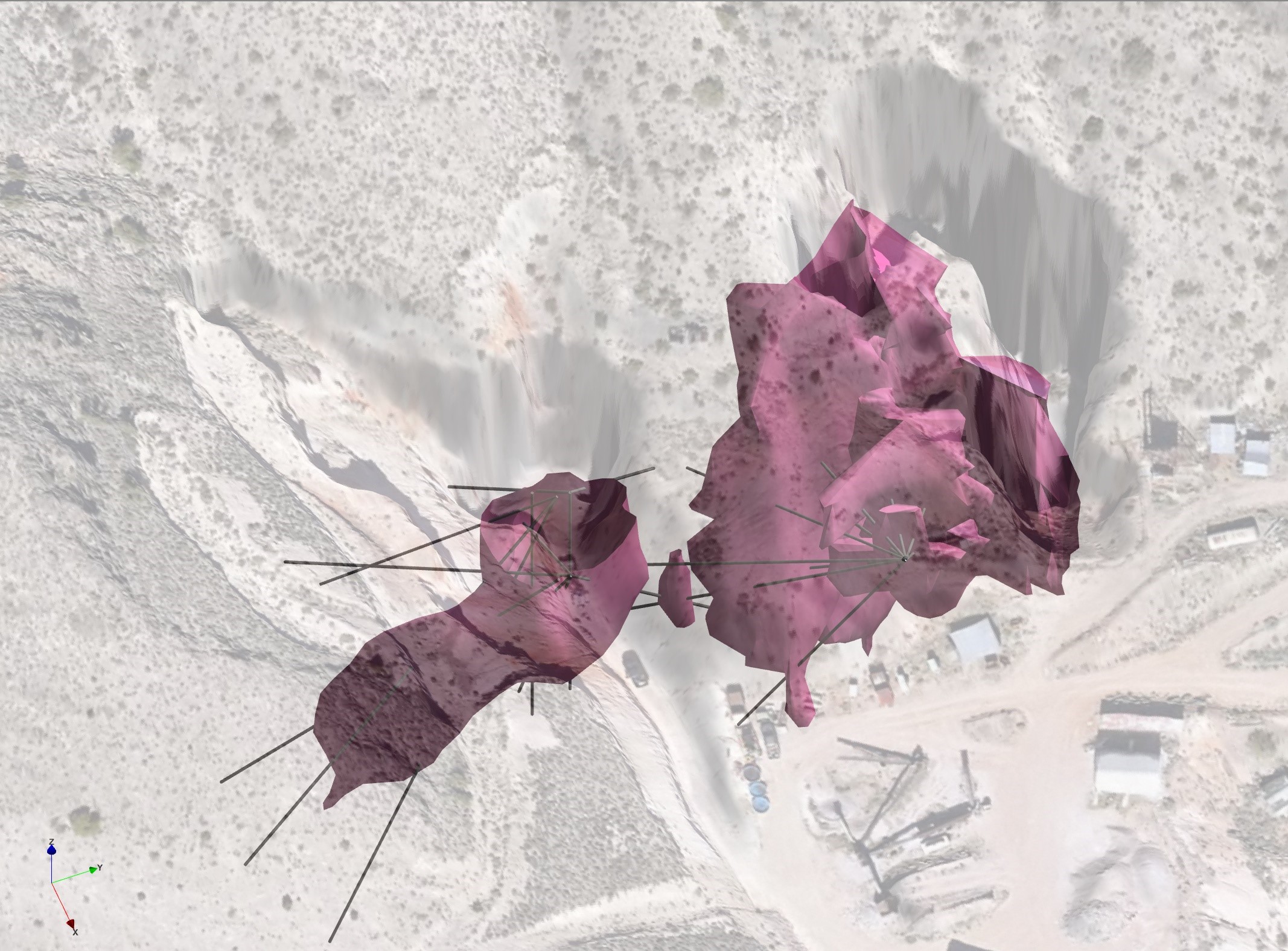 Fig 6. Preliminary 3D render of the Fluorspar mineralization distribution after completion of 2020 delineation drilling at the Lost Sheep Mine (see buildings for scale).

Drill samples are in transit to Vancouver (Canada) following strict chain of custody and QA/QC protocols that include insertion of blank, standard and field duplicate samples. Samples are then being sent to AGAT Laboratories in Burnaby for preparation and AGAT Labs in Mississauga, Ontario for final assays.

Following the successful discovery, the Company is proceeding to test other prospective targets immediately adjacent to the current operation (250 and 350 meters away) and within the permitted area (See news release dated Sept. 9th, 2020) before the snow and winter arrives. These sites are based on a conceptual model that links fluorite bearing breccia pipes exposed fluorspar at surface in normal fault planes. The model is testing the upper part of the severed breccia pipes in the hanging wall block, based on surface expression features and alteration present.

For further information, please contact Mark Bolin by phone at 604-781-0535 or by email at mbolin@aresmining.com

Neither the TSX Venture Exchange nor its Regulation Service Provider (as that term is defined in the policies of the TSX Venture Exchange) accepts responsibility for the adequacy or accuracy of this release. No stock exchange, securities commission or other regulatory authority has approved or disapproved the information contained herein.