Vancouver, B.C – January 27th, 2021 — Ares Strategic Mining Ltd. (TSXV: ARS) (OTCQB: ARSMF) (FRA: N8I1),(“Ares” or the “Company”), is pleased to announce it has received the remaining assay results from its delineation drilling program at its Utah fluorspar mine. Ares has successfully located and confirmed additional fluorspar mineralization within its permitted mining area, which will be included in its primary mining operation for 2021.

A total of 10 reverse circulation drill holes, drilling approximately 875 meters, were collared between the two known fluorspar deposits on the Company’s permitted mining area. Fluorspar mineralization was consistent throughout the entire area, connecting the large fluorspar deposits examined during two previous drill programs in 2020. Drilling was directed under the shallower part of the Purple Pit, where large areas of unmined fluorspar mineralization were intersected, proving an additional 60 m of high-grade fluorspar (see Figures 2, 3 and 4). These fluorspar pipes remain open at depth.

James Walker, President and CEO stated: “We are pleased to have received these long-awaited assay results and are excited to complete our mine planning and advance the operation. We knew from visual confirmation that the quality of fluorspar from the drill program was high, and its great to have the laboratory confirm these estimations. The assay results can now be fitted to a block model, and the optimum mining methods can be finalized. Ares continues to demonstrate some of the highest naturally occurring grades of fluorspar in the world, while concurrently demonstrating negligible detrimental impurities. Combined with Ares’ recent metallurgical advancements, the prospects of the expanded mining operation continue to improve.” 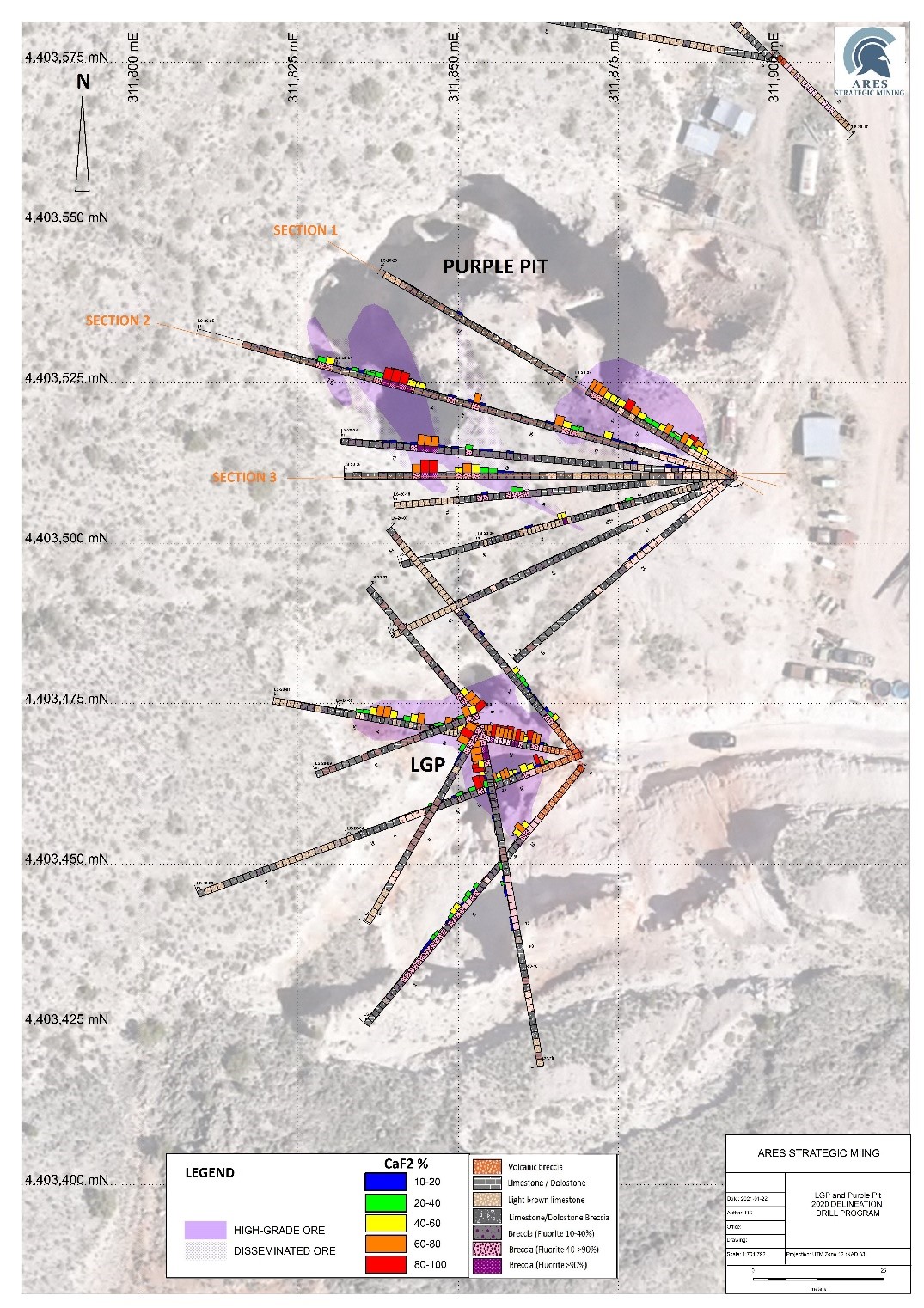 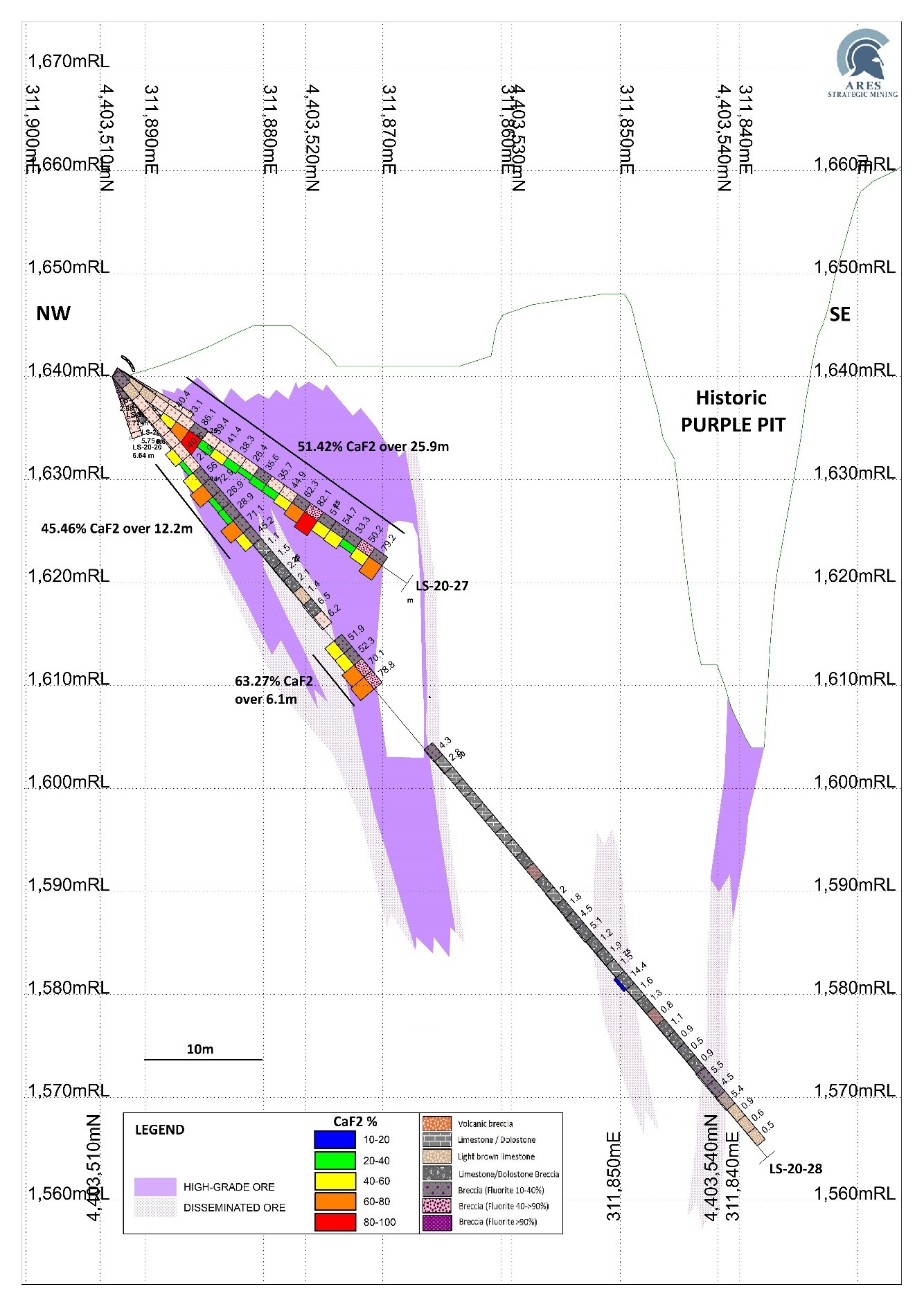 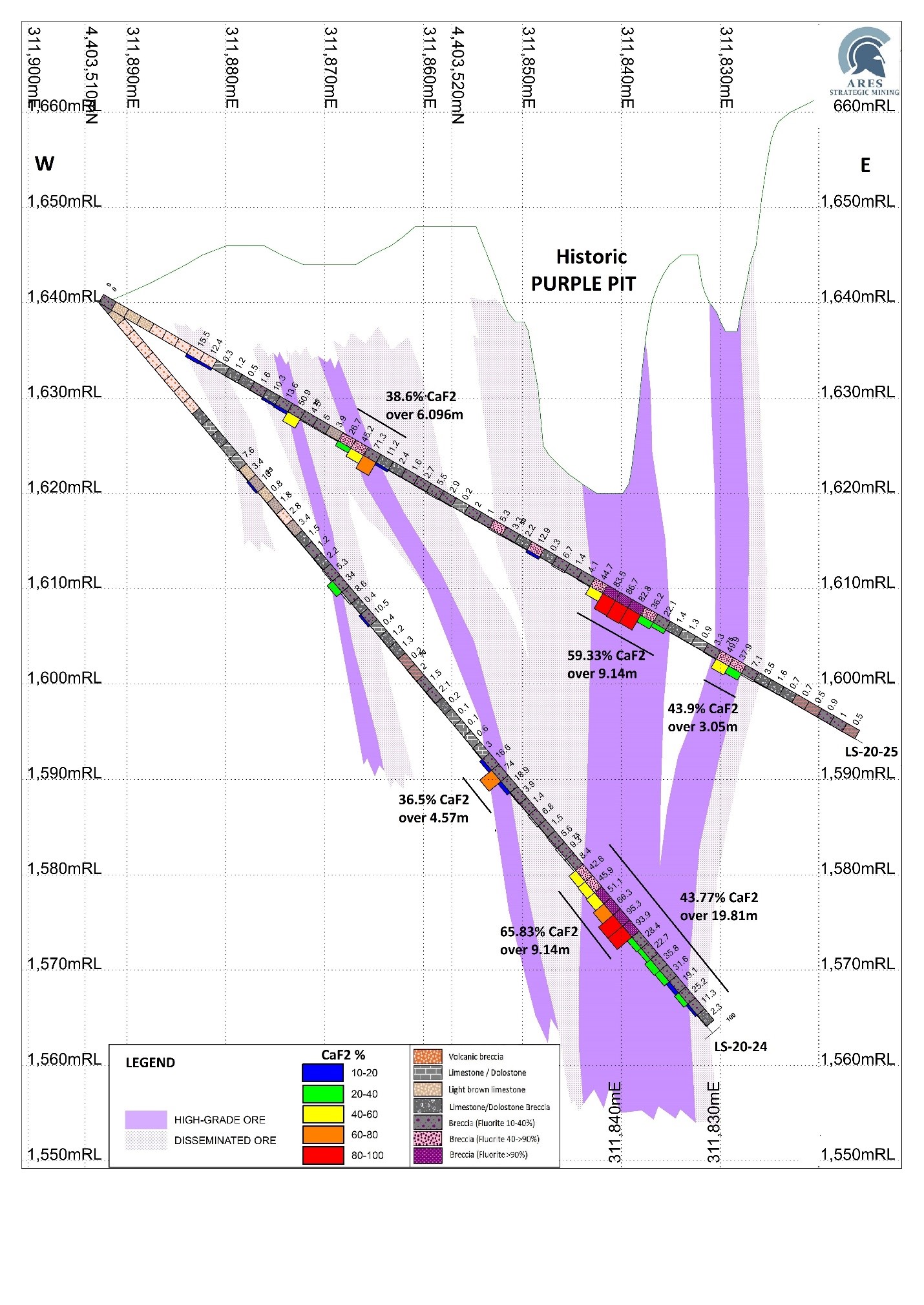 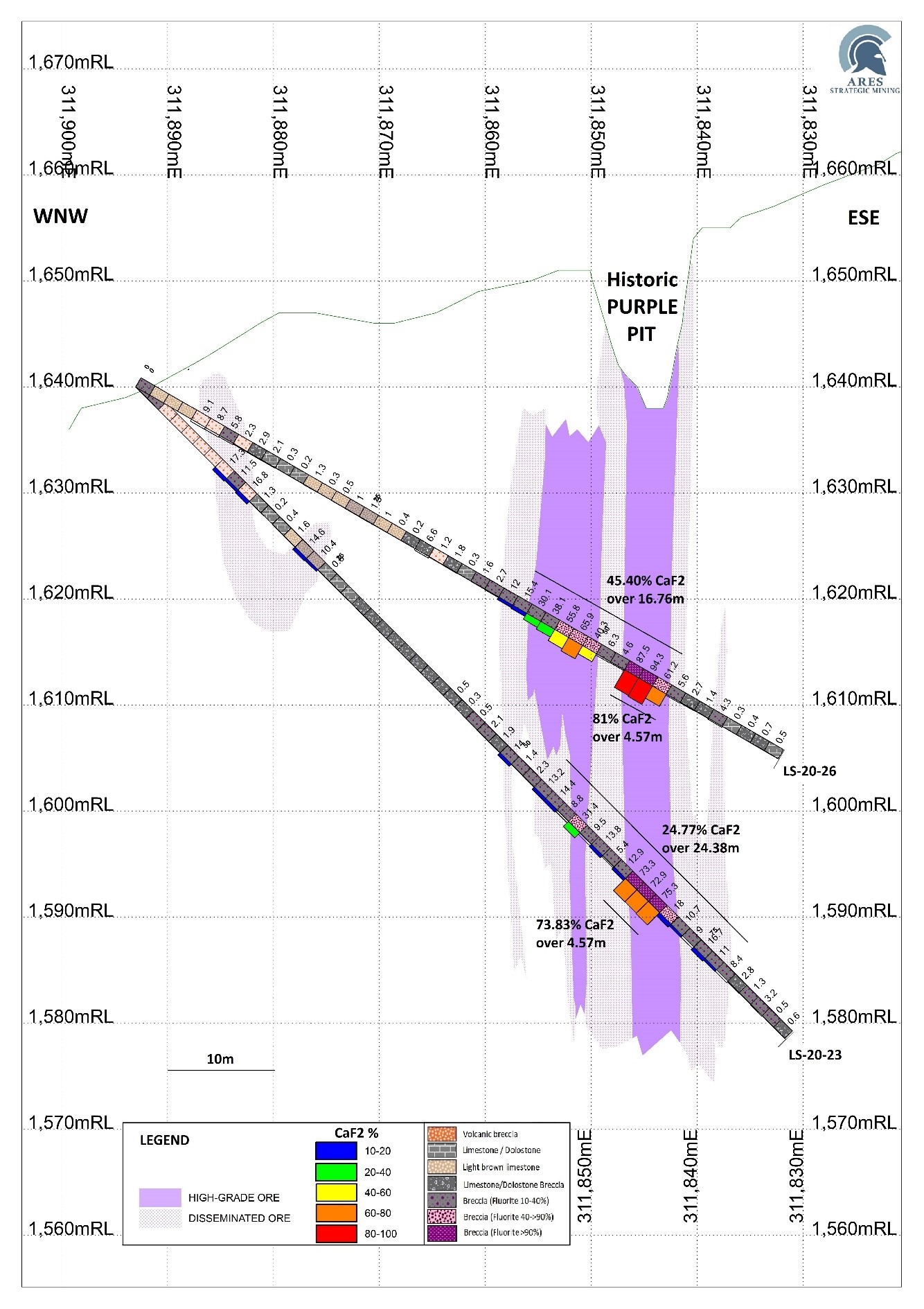 Drill holes LS-20-24 and LS-20-25 (Section 2) test the down dip projection of the fluorspar mineralization left at the bottom of the Purple Pit and successfully intercepted mineralization over 50 meters beneath the historic pit floor. The zone remains open at depth.

Drill holes LS-20-23 and LS-20-26 (Section 3) also show over a 50 meters extension of fluorspar mineralization from the Purple Pit floor and mineralization remains open at depth.

(*) The results reported are intersect lengths and due to the nature of the fluorspar mineralization as irregular breccia pipes they are not considered true widths at this moment.

Drill samples were sent to AGAT Laboratories in Burnaby, British Columbia for preparation and then to AGAT Labs in Mississauga, Ontario for final assays. Assay method for CaF2 consisted of 201-676 Lithium Borate Fusion, Summation of Oxides and XRF Finish. Routine blank, standard, and field duplicates were inserted in the sample batches following standard QA/QC practices.

For further information, please contact Mark Bolin by phone at 604-781-0535 or by email at mbolin@aresmining.com

Neither the TSX Venture Exchange nor its Regulation Service Provider (as that term is defined in the policies of the TSX Venture Exchange) accepts responsibility for the adequacy or accuracy of this release. No stock exchange, securities commission or other regulatory authority has approved or disapproved the information contained herein.