Palm Beach, FL – February 25, 2019 – A 2016 report release by a well-respected industry research firm, Statista, painted a rather rosy picture for the global augmented (“AR”) and virtual reality (“VR”) segments. The report stated that: “In 2022, the augmented and virtual reality market is expected to reach a market size of $209.2 billion U.S. dollars.”   But a new report from Zion Market Research, just recently released, actually gave the AR and VR global markets a higher than expected valuation: “… at around USD $26.7 billion in 2018 and is expected to reach approximately USD $814.7 billion by 2025, at a CAGR of 63.01% between 2019 and 2025.” So it appears that the markets are exceeding prior expectations.  The AR and VR markets are usually grouped together but there are differences in the AR and VM technologies themselves. Each has a strong market share on its own but can also be used in conjunction, which is called augmented virtuality (“AV”), according to PC Magazine.    Active tech companies in the markets this week include Vuzix® Corporation (NASDAQ: VUZI), QUALCOMM Incorporated (NASDAQ: QCOM), Lumentum Holdings Inc. (NASDAQ: LITE), Apple Inc. (NASDAQ: AAPL), NVIDIA Corporation (NASDAQ: NVDA).

Zion summarizes that the two biggest global markets for the technologies are North America and Europe. North America is expected to hold the largest share in AR and VR due to the rising demand in the media and entertainments markets, while Europe will hold a substantial share due to early adoption by EU consumers. It concludes that Asia pacific should likely have the highest CAGR in the future.

Vuzix® Corporation (NASDAQ: VUZI) BREAKING NEWS:  Vuzix® Corporation, (“Vuzix” or, the “Company”), a leading supplier of Smart Glasses and Augmented Reality (AR) technology and products is pleased to announce the debut of Vuzix’ next generation enterprise smart glasses, the 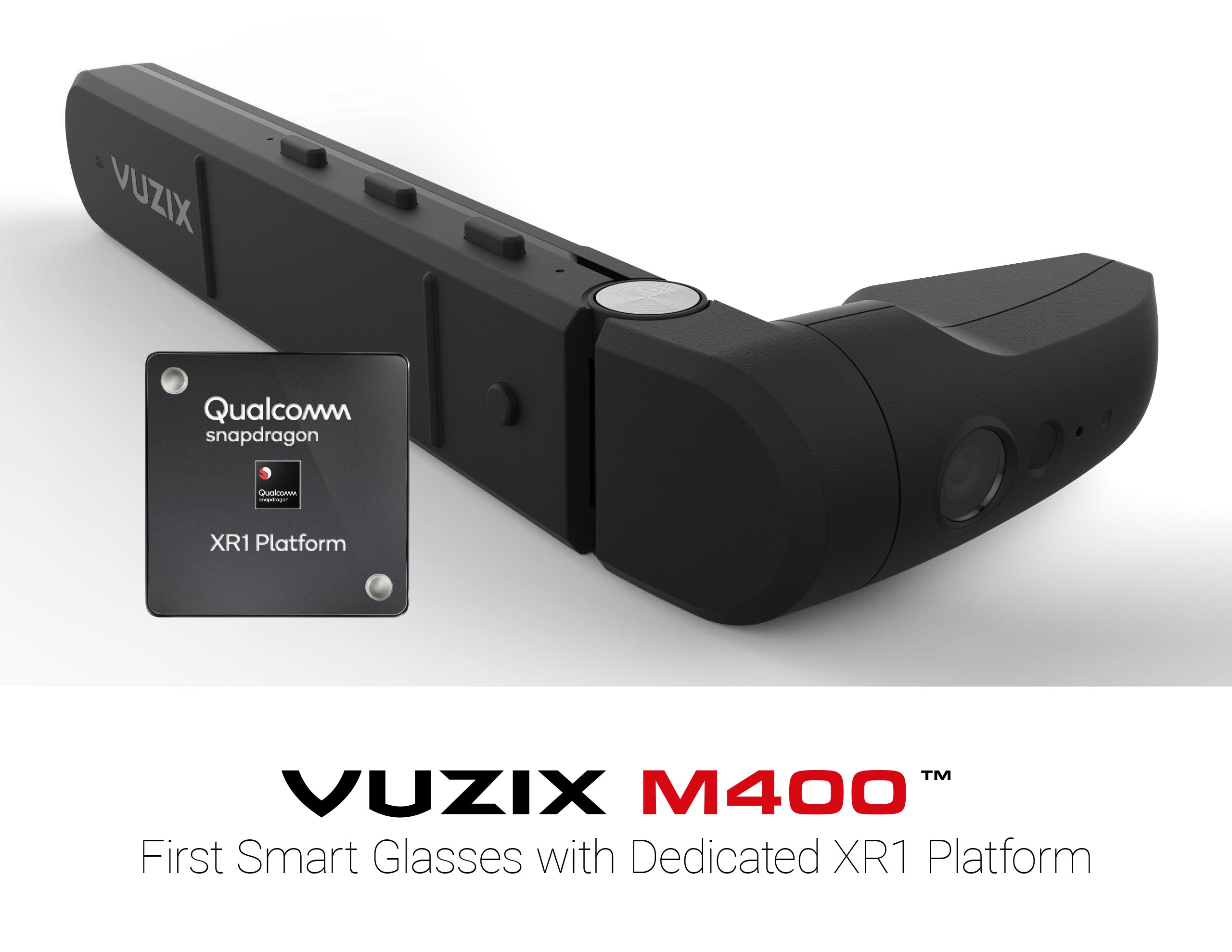 M400, one of the first products made commercially available using the Qualcomm® Snapdragon™ XR1 platform.

Since the Company’s collaboration with Qualcomm Technologies, Inc., a subsidiary of Qualcomm Incorporated, was announced in May 2018, the teams have been actively engaged to develop the first Snapdragon XR1-based enterprise smart glasses.  The Vuzix M400 enterprise smart glasses will be unveiled at Mobile World Congress (MWC) taking place February 25-28, 2019 at the Fria Gran Via in Barcelona, Spain.

“Snapdragon XR1 is the first dedicated XR platform from Qualcomm Technologies targeted to the class of devices that Vuzix has mastered. Vuzix’ focus on wearability, experience, and form factor combined with XR1 will drive smart glasses to the next level,” said Hugo Swart, head of XR, Qualcomm Technologies, Inc. “Qualcomm Technologies is a strong believer in the smart glasses segment for the enterprise. We look forward to seeing our collaboration with Vuzix help scale adoption in enterprises and become a mainstream device to help increase employee productivity in the new era of AI and immersive computing.”

The new product, currently referred to as the Vuzix M400 Smart Glasses, is expected to enter volume production in summer 2019. Further details and pricing will be announced this spring as well as the commencement of an early engagement program for select developers and customers. Even with all its new capabilities and features, the product will be physically, mechanically and for most software 100% compatible with Vuzix’ existing M-Series products.  Read this entire release and more news for Vuzix® at:  https://financialnewsmedia.com/news-vuzi

Additional recent developments and major influences in the tech industry include:

Additionally, Qualcomm has an Augmented Reality platform and is working toward enabling a digital reality. Augmented Reality (AR) is the concept of superimposing digital content (such as online information and graphics) on top of a view of the real world as seen through the viewfinder of a camera. The company’s vision-based AR platform uses complex computer vision algorithms, tightly aligns computer graphics, and includes robust tracking and image detection.

On February 4, the company announced that it will present a collection of innovative photonic-based products for a wide range of applications in 3D sensing and advanced manufacturing markets including – VCSELs, edge-emitting DFBs, kW fiber, pump, and diode lasers at SPIE Photonics West 2019 held in San Francisco, Calif., from February 5 – 7, 2019 at Moscone Center in the South Hall in booth #1123.

Apple Inc. (NASDAQ: AAPL) not that long ago announced that John Giannandrea has been named to the company’s executive team as senior vice president of Machine Learning and Artificial Intelligence Strategy. Giannandrea oversees the strategy for AI and Machine Learning across all Apple products and services, as well as the development of Core ML® and Siri® technologies. “John hit the ground running at Apple and we are thrilled to have him as part of our executive team,” said Tim Cook, Apple’s CEO.

On its website the company says: Apple hardware and software have always been designed together for the best experience possible. Now that experience includes augmented reality like you’ve never seen it before. iOS 12 and ARKit 2 take advantage of the powerful hardware in iPhone and iPad to bring the virtual world seamlessly into the real world.

NVIDIA Corporation (NASDAQ: NVDA) on February 22, the company introduced the GeForce® GTX® 1660 Ti, a new gaming GPU that delivers a big step up in performance and power efficiency for today’s most popular games. It is available now worldwide starting at $279.

Based on the 12th generation Turing™ GPU architecture, the GTX 1660 Ti takes advantage of all of Turing’s shader innovations to deliver 2x the TOPS of the previous-generation Pascal™ architecture. It supports concurrent floating point and integer operations, a unified cache architecture with 3x the L1 cache, and turbocharged performance using adaptive shading technology.

DISCLAIMER:  FN Media Group LLC (FNM), which owns and operates Financialnewsmedia.com and MarketNewsUpdates.com, is a third party publisher and news dissemination service provider, which disseminates electronic information through multiple online media channels.  FNM is NOT affiliated in any manner with any company mentioned herein.  FNM and its affiliated companies are a news dissemination solutions provider and are NOT a registered broker/dealer/analyst/adviser, holds no investment licenses and may NOT sell, offer to sell or offer to buy any security.  FNM’s market updates, news alerts and corporate profiles are NOT a solicitation or recommendation to buy, sell or hold securities.  The material in this release is intended to be strictly informational and is NEVER to be construed or interpreted as research material.  All readers are strongly urged to perform research and due diligence on their own and consult a licensed financial professional before considering any level of investing in stocks.  All material included herein is republished content and details which were previously disseminated by the companies mentioned in this release.  FNM is not liable for any investment decisions by its readers or subscribers.  Investors are cautioned that they may lose all or a portion of their investment when investing in stocks.  For current services performed FNM has been compensated forty six hundred dollars for news coverage of the current press releases issued by Vuzix® Corporation  by the company.  FNM HOLDS NO SHARES OF ANY COMPANY NAMED IN THIS RELEASE.