Vancouver, BC – April 21, 2021 – Leviathan Gold Ltd. (TSXV: LVX) (0GP – Germany) (“Leviathan”, the “Company”) is pleased to announce that further to its press release of February 18, 2021 in respect to the launch of drilling at the Avoca project (“Avoca”) in the Victorian goldfields, Australia, that results have been received for the initial three holes of this program.

The most prominent interval among results to date is 8.24 g/t Au over 6.63 meters from 161.95 meters, including 11.54 g/t over 1.83 meters and 82.1 g/t over 0.28 meters returned from hole EH003 drilled at the Excelsior Reef. This interval is believed to represent the down-dip continuation of mineralization observed in historic mine workings, and is characterized by intense quartz veining, visible gold, and enveloping sericitic alteration and base metal sulphides. On the basis of structural data gathered from EH003, as well as from other drill holes at Excelsior, a north-easterly plunging fabric – potentially representing the strike continuation of mineralization – is projected. This feature is presently the subject of further drill-testing. Additional drilling will also be required to determine the true thickness of mineralization.

Leviathan Gold Chief Executive Officer, Luke Norman, remarked: “We are very pleased that initial drilling at the Excelsior Reef has confirmed the presence of high-grade gold mineralization across multiple sample intervals, thereby demonstrating the strength and downward continuation of mineralization reported in historic mining records for this prospect, consistent with our initial targeting model. Structural information yielded by Leviathan’s work suggests the further continuation of mineralization to the north-east of the historic Excelsior mine workings, a ready target that is now the subject of drill-testing.”

A total of 1,876 meters in 11 holes have been drilled at Excelsior to date. Highlights of results to date are provided in Table 1, collar information in Table 2, and full results in Table 3. Photographs of mineralization in EH003 are shown in Figure 1, a plan of drilling in Figure 2, and a section through Excelsior in Figure 3. The balance of results is awaited and will be reported on in due course. Drilling at Excelsior forms part of a greater program of approximately 30,000 meters that Leviathan is currently deploying at Avoca and Timor.

Table 1: Significant intervals from drilling at the Excelsior Reef

Table 2: Collar data for drilling at the Excelsior Reef

Table 3: Full results by sample interval of drilling at the Excelsior Reef 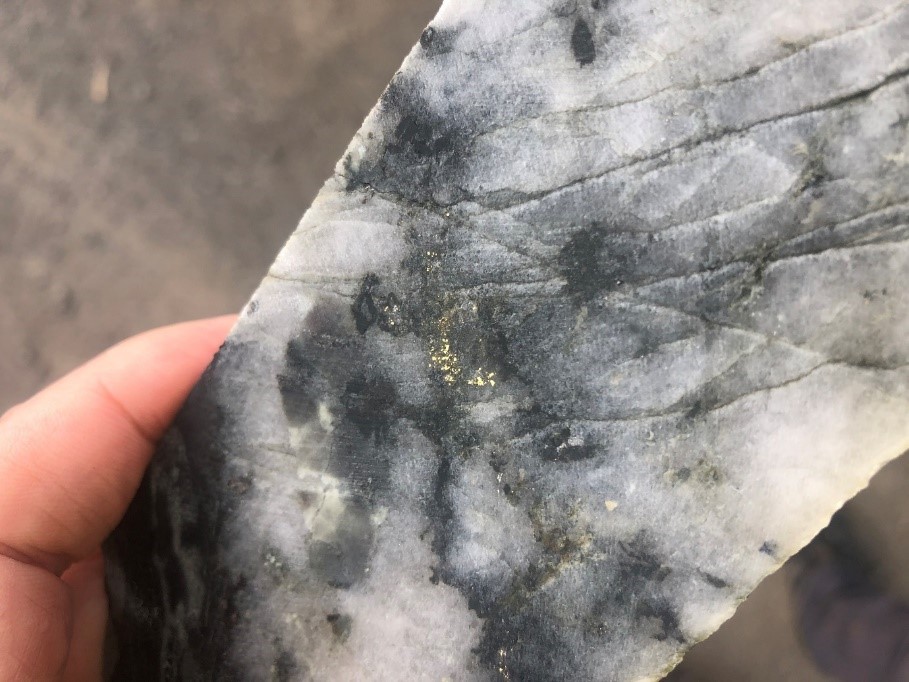 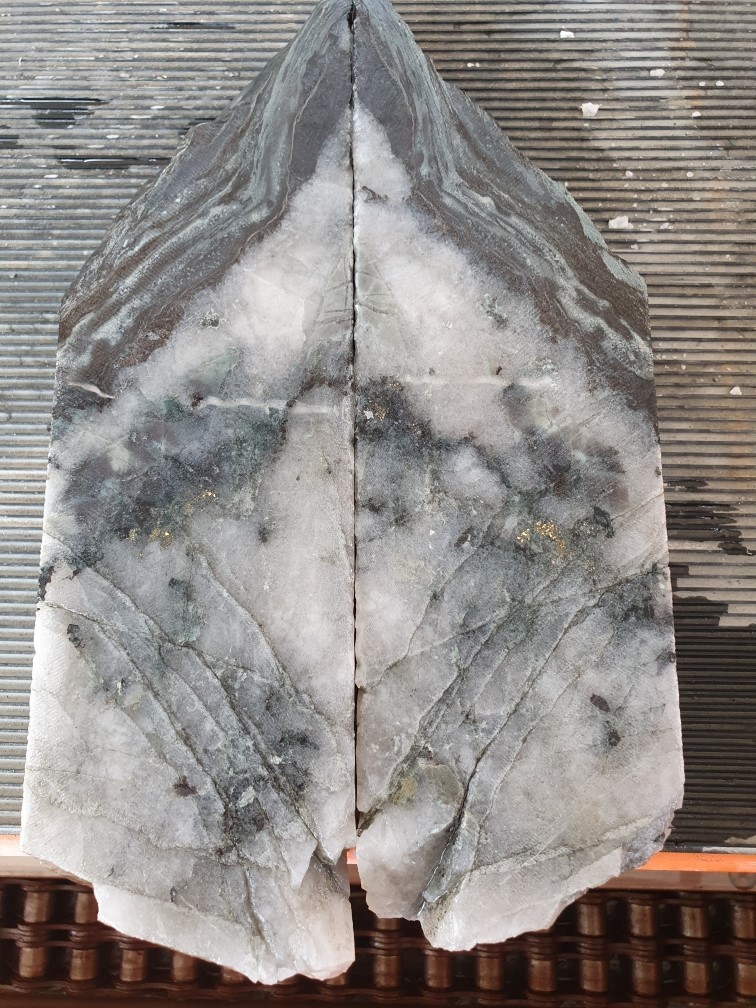 Figure 1b: Photograph of visible gold mineralization in drill hole EH002 at 72.54 meters. 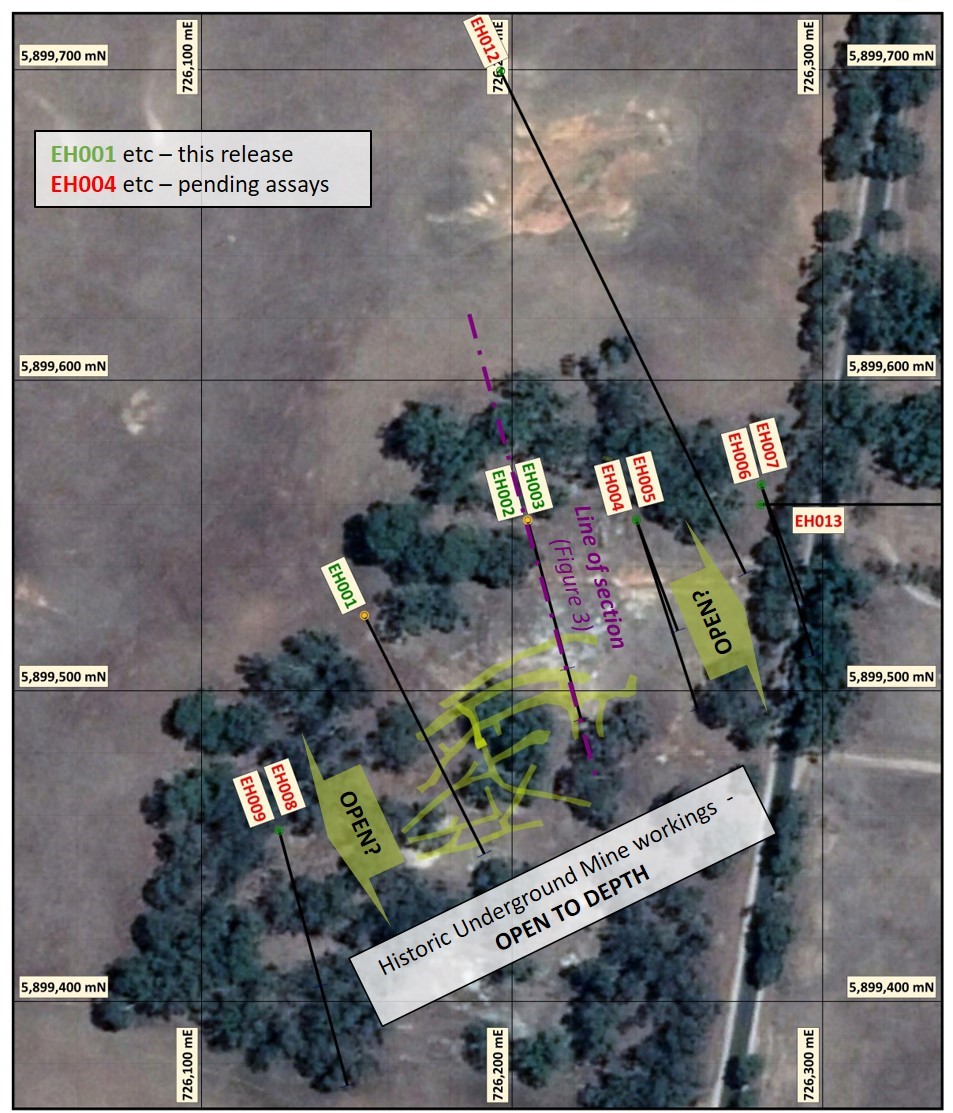 Figure 2: Plan view of completed drilling and reported results at the Excelsior Reef 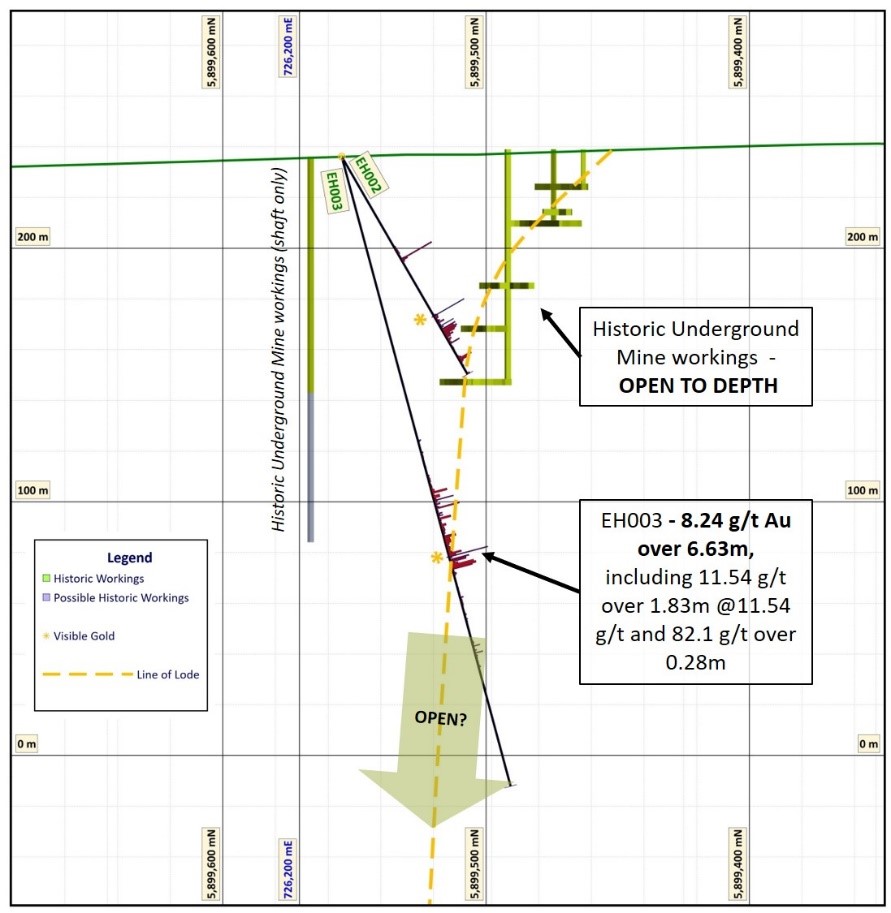 About the Excelsior Prospect

The Excelsior prospect is interpreted to host structurally controlled gold mineralization developed within quartz veins. Historic production records from Excelsior indicate the mining of 13,200 tons for 9,260 ounces of gold down an ore shoot to a depth of 100 meters at an average recovered grade of 22 g/t Au between 1909 and 1915[1], with said mineralization open to depth and along strike.

Recent exploration work completed on Excelsior.[2] included surface sampling and mapping. Two soil sampling traverses were conducted at the western part of the prospect, one pf which crossed considerable quartz vein float. The outcrop of the reef is presently covered by mine tailings. The initial phase of drilling work by Leviathan, which is expected to comprise at least 5,000 meters of diamond drilling, has been designed to target near-surface strike and depth projections of mineralization around and beneath the Excelsior Reef.

There are over thirty historical gold workings within the Avoca project area[4], all of which require additional mapping, surface sampling and drill testing to assess their potential and on which the Company intends to report on an ongoing basis. The highest priority targets include:

The Timor project lies immediately east of the Avoca project and hosts numerous hardrock and alluvial gold deposits as evidenced by the extent of historic workings, of which approximately twenty hardrock workings can be considered to have been significant producers. The highest priority targets include:

The Leviathan Group of Mines and Shaw’s Reef both lie on separate large regional north-south structures known to occur for tens of kilometers associated with hardrock workings over their length. Neither of these structures have witnessed significant drilling. These two mineralized structures will be a near-term focus for exploration within the Projects. Modern core orientation techniques, with the objective of further understanding the structural controls on mineralization, will be systematically applied during this program.

The technical content of this news release has been reviewed, verified and approved by Keith Whitehouse, AusIMM (CP), Exploration Manager of Leviathan Gold (Australia) Pty. Ltd., a qualified person as defined by NI 43-101.

Drilling was carried out by independent contractors using PQ and HQ size tooling. Average core recovery for the program was 96%. Drill core was cut in half by Leviathan using a rock saw with one half of the core then taken as a sample for analysis. Sample intervals were generally between 50 and 102 centimeters producing samples of between 1.5 to 4.1 kg. Samples were delivered to On Site Laboratory Services (Pty) Ltd (“On Site”), of  Bendigo, Victoria. The samples were crushed and pulverized to >95% passing 75 µm using industry standard Boyd crushers and LM% ring mills were fire assayed for Au using a 25 g charge, method code PE01S, and were analyzed for multi-elements using method code BM011 following an aqua regia digestion. Regular pulp duplicates were generated and reported by the laboratory together with regular replicate results of the digested gold prill.  Replicate results were provided for 100% of gold grades greater than 10 g/t and more than 85% of grades greater than 5 g/t Leviathan routinely inserted multi-element geochemical standards and blanks together  with samples flagged for coarse crush duplicates sampling into the drill core sample stream as part of a documented Quality Assurance/Quality Control (QAQC) process to monitor laboratory performance, during the drilling program QAQC material was inserted into sample batches at the following rates per primary sample: ¼ core duplicates 1 in 20; basalt blanks 1 in 15; certified reference material (“CRM”) 1 in 20. QAQC sampling was considered to provide acceptable results however Leviathan is working with Onsite to further optimize the appropriate treatment of high-grade auriferous sample material, as well a an appearingly low bias in CRM performance. Sample grades were checked against recovery percentage for potential bias; no discernable high- or low-grade bias was observed.

On behalf of the Company,

Information set forth in this news release contains forward-looking statements that are based on assumptions as of the date of this news release, including with respect to geological prospects of Leviathan’s mineral projects, planned exploration activities, success of exploration activities, the relevance of historical information, the continuation of mineralization, the relevance of comparable projects, the timing of exploration activities, general business and economic conditions; that applicable approvals are obtained; that qualified workers, financing, permits, approvals, and equipment are obtained in a timely manner; that market conditions continue; that contractual counterparties perform their obligations as required; and that Leviathan is able to locate sufficient financing for favourable ongoing operations. These statements reflect management’s current estimates, beliefs, intentions and expectations. They are not guarantees of future performance. Leviathan cautions that all forward looking statements are inherently uncertain and that actual performance may be affected by many material factors, many of which are beyond Leviathan’s control. Such factors include, among other things: risks and uncertainties relating to whether exploration activities will result in commercially viable quantities of mineralized materials; the possibility of changes to project parameters as plans continue to be refined; the ability to execute planned exploration and future drilling programs;COVID-19; the ability to obtain qualified workers, financing, permits, approvals, and equipment in a timely manner or at all and on reasonable terms; changes in the commodity and securities markets; non-performance by contractual counterparties; and general business and economic conditions, Accordingly, actual and future events, conditions and results may differ materially from the estimates, beliefs, intentions and expectations expressed or implied in the forward-looking information. Although Leviathan has attempted to identify important risks and factors that could cause actual actions, events or results to differ materially from those described in forward-looking statements, there may be other factors and risks that cause actions, events or results not to be as anticipated, estimated or intended. Consequently, undue reliance should not be placed on such forward-looking statements. In addition, all forward-looking statements in this press release are given as of the date hereof. Leviathan disclaims any intention or obligation to update or revise any forward-looking statements, whether as a result of new information, future events or otherwise, save and except as may be required by applicable securities laws. The forward-looking statements contained herein are expressly qualified by this disclaimer.

[4] State of Victoria Mining Surveyors and Registrar’s Quarterly Reports from 1860 to 1891 and Annual Reports issued thereafter. All the production from these reefs occurred within the Avoca licence.

Canada, the US and Other Countries Partner to Secure Lithium and Other Critical Minerals