GET TOP RATED STOCK ALERTS ACTIVE TRADERS DEPEND ON 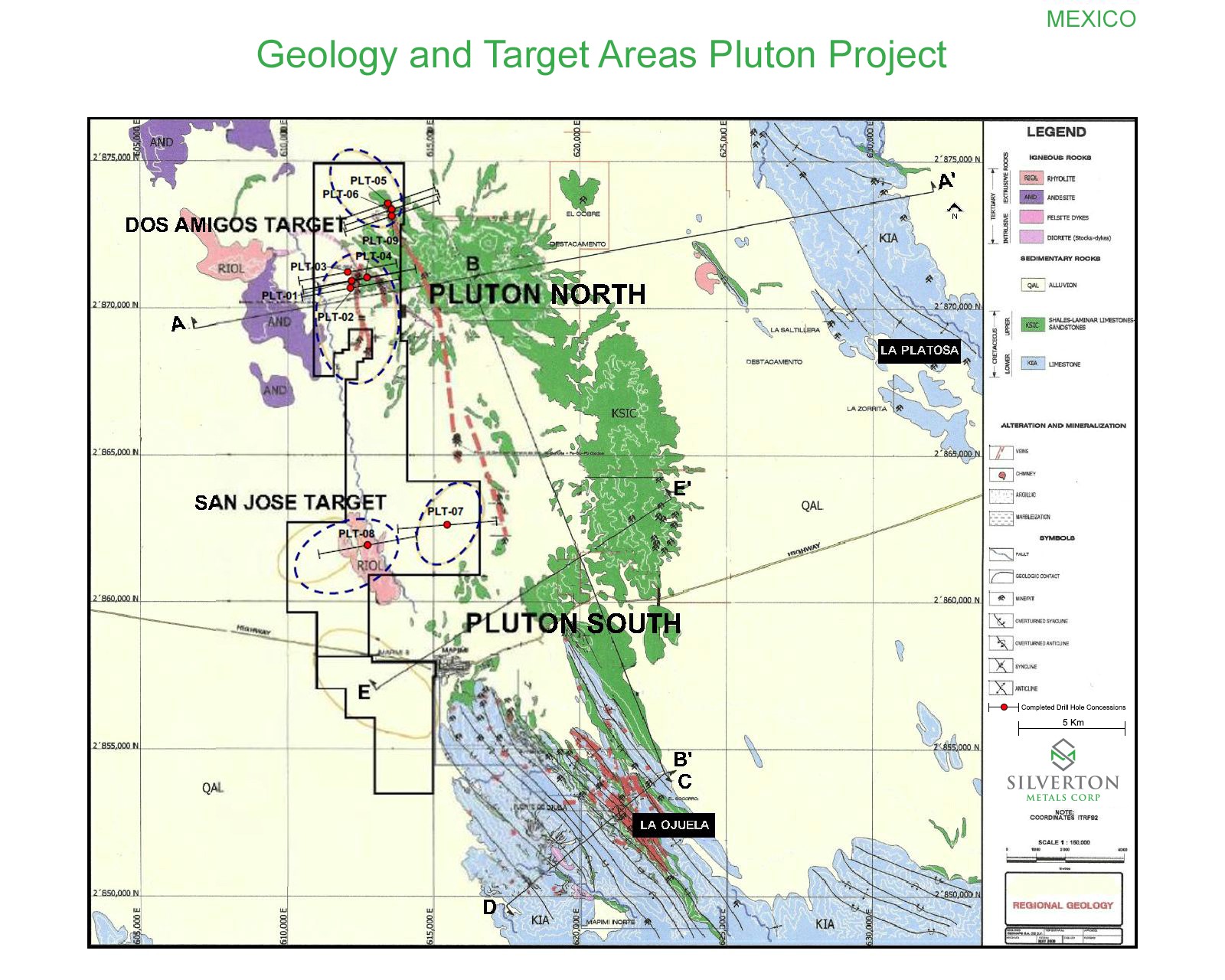 Vancouver BC – September 27, 2021 – Silverton Metals Corp. (TSX-V: SVTN) (OTCQB: SVTNF) (“Silverton” or the “Company”) is pleased to announce the commencement of exploration at the Pluton silver-zinc-lead project in the state of Durango, Mexico.

The Pluton property is within the prolific carbonate replacement, gold, silver, zinc and lead Ojuela-Mapimi Mining District in northern Durango, Mexico. The property covers 6,534 hectares and is located near Excellon Resources’ Platosa mine, one of the highest-grade silver producers in Mexico. In the first six months of 2021, Platosa grade was 506 g/t silver with a silver equivalent metal production of over one million ounces1. Not only does Pluton share a similar geological environment to Platosa, but it also lies along strike from the past producing La Ojuela mine, historically one of the richest silver mines in Mexico and one of the first mines developed by Peñoles in the late 1800’s.  La Ojuela was in production for over 350 years. Exploration targets at Pluton are Platosa and Ojuela style silver-lead-zinc manto and chimney carbonate replacement deposits (“CRD”), which may lie beneath the shallow alluvium and strongly altered clastic rocks that overlie the productive carbonate rocks.

Mr. John Theobald, President & CEO of Silverton comments “I am very pleased to start working on Pluton, the district is a major hydrothermal system with favourable lithologies, structure, alteration and widespread mineralisation yet despite this remains relatively unexplored. Pluton is a district scale project targeting high-grade carbonate replacement type silver-zinc-lead deposits which are typically in the range of tens of millions of tons such as the Santa Eulalia mine in Chihuahua and represent robust exploration targets. The nearby Platosa mine is Mexico’s highest-grade silver mine with a silver equivalent grade of over 1,000g/t2”.

Aeromagnetic and ZTEM surveys show that Pluton, Platosa and the Ojuela-Mapimi district lie in close proximity to a 25 km x 10 km area of intrusions which do not outcrop. The aeromagnetic and ZTEM results along with geochemical and IP surveys identified five targets and resulted in a 3900m nine-hole diamond drill program in 2011. All holes encountered silver-lead-zinc mineralization in veins in an altered shale (hornfels) that overlies the carbonate horizon which host the along strike extension of the Ojuela mine. None of the holes were drilled deep enough to intersect carbonate rocks. The vein mineralization discovered is interpreted as leakage into the nonreactive shale-hornfels and is potentially connected to mineralized bodies in the carbonate rocks below. The high-grade target of silver-rich massive sulfides could lie at the contact of the limestone and the downward projection of the mineralized fractures seen in the hornfels. An ancillary advantage to the district is that the Peñoles Torreon smelter is only 50km away, and transport and power infrastructure is excellent.

Silverton will focus on the Dos Amigos target in the north of the licence area and San Jose in the south (Figure 1). Initial work will include three-dimensional modeling of geophysical data as well as seismic and gravity surveys to rank targets to be tested with drilling. Mineralisation at the Platosa mine and La Ojuela mine, however, are not necessarily indicative of mineralisation at the Pluton property.

The Company is pleased to announce the appointment of Mr. W. Barry Girling as Vice President, Corporate Development. Mr. Girling has been active in various aspects of mineral exploration since 1977, he holds a B.Com. (Finance) degree from the University of British Columbia and currently provides consulting services to a number of junior resource companies. He has strong capital markets experience and serves as a Director for Silverton Metals Corp., I-Minerals Inc., Silver One Resources Inc. and Santa Cruz Silver Mining Ltd.

Mr. P. Born, P.Geo, a Qualified Person under National Instrument 43-101, has reviewed and approved the technical information contained in this news release.

Silverton Metals Corp is a Canadian company focused on the exploration and development of quality silver projects. The company holds a 100% interest in three significant silver assets in Mexico – Pluton, in Durango, Peñasco Quemado in Sonora and La Frazada in Nayarit. Silverton management and board have extensive experience identifying and evaluating acquisition targets and exploration prospects. The company intends to build a strong portfolio of silver and gold-silver projects to drive future growth by exploration success and from later stage projects with production potential. To achieve this growth the Silverton business plan calls for a dynamic combination of development of its existing properties, acquisitions, and partnerships.

Information set forth in this news release contains forward-looking statements that are based on assumptions as of the date of this news release. These statements reflect management’s current estimates, beliefs, intentions and expectations. They are not guarantees of future performance. Silverton cautions that all forward looking statements are inherently uncertain, and that actual performance may be affected by a number of material factors, many of which are beyond Silverton’s control. Such factors include, among other things: risks and uncertainties relating to Silverton’s limited operating history and the need to comply with environmental and governmental regulations.  Accordingly, actual and future events, conditions and results may differ materially from the estimates, beliefs, intentions and expectations expressed or implied in the forward-looking information. Except as required under applicable securities legislation, Silverton undertakes no obligation to publicly update or revise forward-looking information.

to be the first to know when this emerging company issues Breaking News!

Silverton Metals Corp is a Canadian company focused on the exploration and development of quality silver projects. The company holds a 100% interest in three significant silver assets in Mexico – Penasco Quemado in Sonora; La Frazada, Nayarit and Pluto, in Durango. Silverton acquired these assets from Silver One Resources, one of the company’s largest shareholder. The company will carry out an aggressive drill program consisting of 3000 meters of phase 1 and 8000 meters of drilling in phase 2.

Silverton management and board have extensive experience identifying and evaluating acquisition targets and exploration prospects. The company intends to build a strong portfolio of silver-rich projects to drive future growth by exploration success and from later stage projects with production potential.

To achieve this growth the Silverton business plan calls for a dynamic combination of development of its existing properties, acquisitions, and partnerships.

FN Media Group LLC (FNMG) owns and operates FinancialNewsMedia.com (FNM) which is a third party publisher that disseminates electronic information through multiple online media channels. FNMG’s intended purposes are to deliver market updates and news alerts issued from private and publicly trading companies as well as providing coverage and increased awareness for companies that issue press to the public via online newswires. FNMG and its affiliated companies are a news dissemination and financial marketing solutions provider and are NOT a registered broker/dealer/analyst/adviser, holds no investment licenses and may NOT sell, offer to sell or offer to buy any security. FNMG’s market updates, news alerts and corporate profiles are NOT a solicitation or recommendation to buy, sell or hold securities. The material in this release is intended to be strictly informational and is NEVER to be construed or interpreted as research material. All readers are strongly urged to perform research and due diligence on their own and consult a licensed financial professional before considering any level of investing in stocks. The companies that are discussed in this release may or may not have approved the statements made in this release. Information in this release is derived from a variety of sources that may or may not include the referenced company’s publicly disseminated information. The accuracy or completeness of the information is not warranted and is only as reliable as the sources from which it was obtained. While this information is believed to be reliable, such reliability cannot be guaranteed. FNMG disclaims any and all liability as to the completeness or accuracy of the information contained and any omissions of material fact in this release. This release may contain technical inaccuracies or typographical errors. It is strongly recommended that any purchase or sale decision be discussed with a financial adviser, or a broker-dealer, or a member of any financial regulatory bodies. Investment in the securities of the companies discussed in this release is highly speculative and carries a high degree of risk. FNMG is not liable for any investment decisions by its readers or subscribers. Investors are cautioned that they may lose all or a portion of their investment when investing in stocks. This release is not without bias, and is considered a conflict of interest if compensation has been received by FNMG for its dissemination. To comply with Section 17(b) of the Securities Act of 1933, FNMG shall always disclose any compensation it has received, or expects to receive in the future, for the dissemination of the information found herein on behalf of one or more of the companies mentioned in this release. For current services performed FNMG has been compensated seventy five hundred dollars for Silverton Metals Corp. current news coverage by a non-affiliated third party.  FNMG HOLDS NO SHARES OF Silverton Metals Corp.