The Company will focus the upcoming exploration program on testing the stronger of 41 geophysical targets currently identified on the property.  Twenty-two of these targets have been classified by Garth Kirkham, P. Geo (2013) as priority targets with potential to host deposit-scale VMS mineralization.  This NI43-101 report is available on SEDAR.   To date, positive results of limited drilling collared on the property have suggested that existing geophysical surveys are an excellent exploration indicator of subsurface sulphide mineralization.

QMC has previously drilled one of these targets, on the 1,500m long conductor and intersected mineralization at the top of the conductor.  Two drill holes (RL 12-5 and RL 11-2) intersected significant visible chalcopyrite mineralization (Figure 1).  Drill hole RL 12-5 cut a 10m thick, semi-massive sulphide intersection grading 0.48% Cu (including 0.80% Cu over 1m). Drill hole RL 11-2 was terminated in massive sulphide at a vertical depth of 193 metres. Assays returned grades of 0.26% copper over a 0.3m wide, semi-massive sulphide intersection which contained approximately 20% iron sulphides. Further, deeper drilling may develop a larger zone of additional significant VMS mineralization.  The Company postulates that the top conductor intersected by drilling may be the top of the first lens alternating between copper and gold much like the Lalor Mine which has similar geology.

Characteristically, VMS deposits have a very predictable positioning of the metals, both horizontally and vertically within the deposit.  Gold concentrations generally are elevated in the central copper-rich zones.  These are typically copper +/- gold rich zones in or adjacent to hydrothermally altered zones that develop within fractures. Generally iron sulphides (pyrite and pyrrhotite) occur with the base metal sulphides. 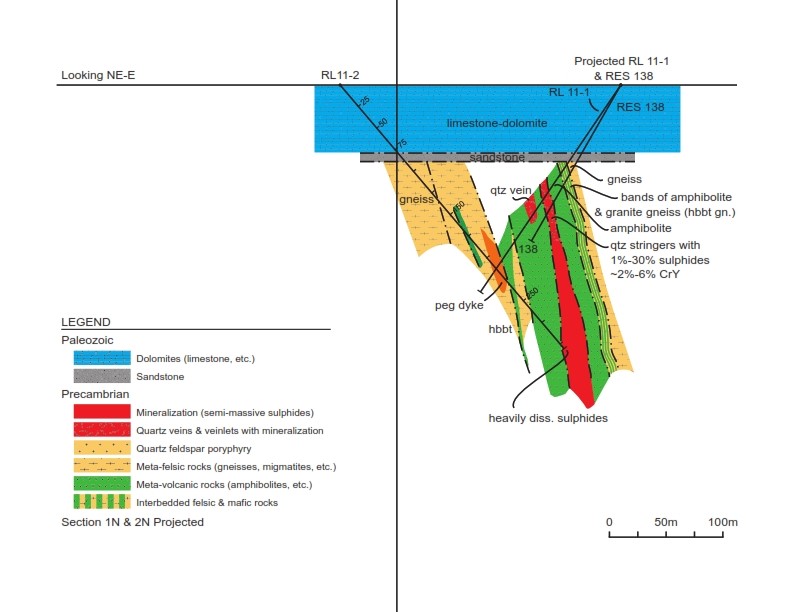 The technical content of this news release has been reviewed and approved by Bruce E. Goad, P. Geo., a qualified person as defined by National Instrument 43-101.

QMC is a British Columbia based company engaged in the business of acquisition, exploration and development of resource properties. Its objective is to locate and develop economic precious, base, rare metal resource properties of merit. The Company’s properties include the Irgon Lithium Mine Project and two VMS properties, the Rocky Lake and Rocky-Namew, known collectively as the Namew Lake District Project. Currently, all of the company’s properties are located in Manitoba.

On behalf of the Board of Directors of

To keep up with the current info on QMC Quantum Minerals Corp, be sure to join our Telegram chat room: http://t.me/quantummineralscorp

$100 Oil Could Turn Namibia Into A Major Oil Hotspot